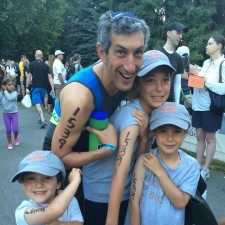 Rabbi Adam Naftalin-Kelman is The Rosalinde and Arthur Gilbert Foundation Executive Director of Berkeley Hillel. Before coming to Berkeley Hillel he served as the Director of Hillel at the University of Colorado at Boulder, upon completing his Rabbinic Studies at the Ziegler School of Rabbinic Studies. Adam grew up in Los Angeles and was active in the Jewish community as a youth and teen, attending Heschel Day School and Camp Alonim.  He attended the University of Rhode Island where he studied Accounting and Management Information Systems. While at URI he started a student run coffee house called 193 degrees. Upon completion of college he began work for Arthur Andersen as a business consultant. After working for Arthur Andersen he spent five years in Rabbinical School which then led him to the Hillel world. Adam loves living in the Bay Area and the active lifestyle.  At anytime you will find him training for a triathlon, marathon or some other race. He has completed a full Ironman and is currently training to complete the Eversting challenge (https://everesting.cc)   Adam lives in Berkeley with his wife Elana and three sons Yair, Nevo and Etai.