Since Fall 2019, there has been a major Antisemitism Education Initiative on the Berkeley campus. It is coordinated by the Chancellor’s Committee on Jewish Life and Campus Climate, the Center for Jewish Studies, the Berkeley Institute for Jewish Law and Israel Studies, Berkeley Hillel, and the Magnes Collection of Jewish Art & Life. Our faculty and community leaders work closely with university administrators and student leaders to promote antisemitism awareness and education. We regularly host workshops for groups of campus staff and students, bring major speakers to campus, and have created an online module that is used as part of new student orientation.  Many of the online resources can be found on the Center for Jewish Studies at UC Berkeley website.  https://jewishstudies.berkeley.edu/antisemitism-education/

In 2021, as part of the Initiative a short film called “Antisemitism in Our Midst: Past and Present,” was made for use at Berkeley and other colleges and universities. Our initiative has garnered national acclaim and we are regularly consulted about how to raise awareness and create trainings for other campuses across the country. 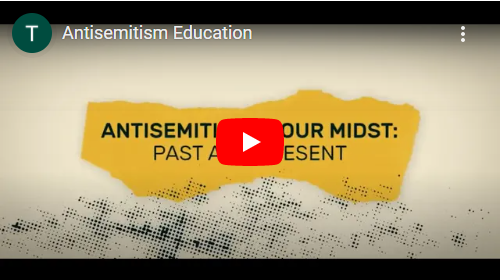 This video is part of the Antisemitism Education Initiative on the Berkeley campus.  The video charts the history of antisemitism from its origins until today. It tackles the hard questions about different and changing forms of antisemitism, persistent anti-Jewish stereotypes, the complex racial position of Jews in contemporary America, and the precise line between criticism of Israel and antisemitism. While the video stands alone as an invaluable tool for antisemitism education, we also provide discussion questions so that it may be a starting point for deeper conversation.

If you have been a victim of an antisemitic incident on campus you can report the incident through the Office for the Prevention of Harassment and Discrimination.  https://ophd.berkeley.edu/submit-report-harassment-or-discrimination