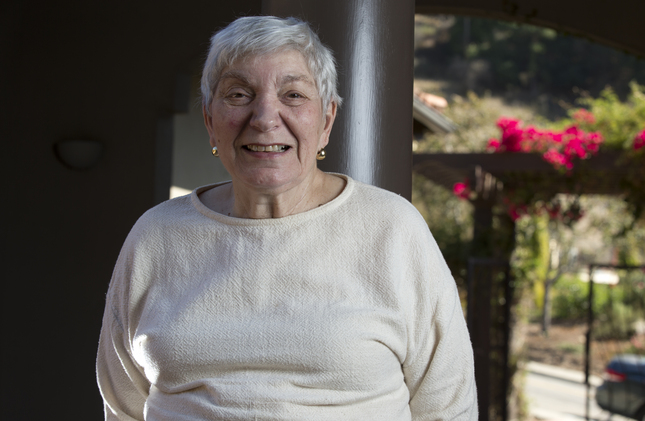 Ilene was born and raised in Kansas City, MO and went to the University of Chicago, where at 19 she married a medical school student, Marvin Weinreb. Ilene continued on to earn a Master’s of history.

Ilene and Marvin settled in Hayward in 1957. A few years later, with their 3 daughters, they joined Temple Beth Shalom in San Leandro. Ilene remains a member more than 50 years later!

As her daughters grew, Ilene realized that she wanted to practice Tikkun Olam outside our home.

With a lifetime of making Shabbat dinners special, Ilene concluded that the students at Berkeley Hillel ought to have regular Shabbat dinners. To make action follow the thought, some 20 years ago Ilene cooked dinner and organized other women to cook dinner at Hillel every Friday. At first, only a few students showed up, but as the word spread that a free dinner was here on Shabbat, 50 and sometimes as many as 200 students would come. Ilene called on all her women friends to cook. When the effort became too big a burden to keep up, the students took over and continue to do so to this day. Ilene has provided a fund to pay for the requirement ingredients.

For many years Ilene has immersed herself in Torah Study and Jewish culture. Berkeley Hillel has been providing a haimish home campus for Jewish Students. And, helping them to become the Jewish Leaders of the Future.

Now, she is pleased to have been asked to join the Board of Hillel.